To seek ‘Enlightenment through Education’ is our basic motto as propounded by Sree Narayana Guru Swami. Several schools were built by the Sabha to spread awareness through education. In 1897, an L.P school was built in Moothakunnam with all amenities and infrastructure, which was later on handed over to the government. To name a few schools -SNMLPS Kottuvallikadu, SNMLPS Moothakunnam, SNMLPS Thuruthipuram are some of them. In addition to this, the organization has striven hard for establishment of high school, middle school, higher school, industrial training institution, arts & science college, engineering college, teachers training college and other teachers training institutions. The Sabha has contributed actively for the educational and cultural developments of the backward people of villages adjacent to it by the establishment of such educational institutions. The Sabha has delved deep into the rising monopolistic, feudalistic practices which created inequality and segregation in our society.

We have rendered our land to the government for a hospital in Moothakunnam and have participated to construct the hospital building for the common good of the people in and around the panchayat. HMDP Sabha took initiative for NH 17 to pass by Paravoor via Moothakunnam, Kodungaloor..

Vavakkadu Urumiparambil Kannu who was a member of Sreemoolam Praja Sabha prior to the formation of united Kerala was also a member and president of this Sabha. Various judges, MLAs and prominent members in the judiciary were nominated from our Sabha.

Government support also has an inevitable role in the progress of our institution. Especially Late Sri.R Sankar, former chief minister of Kerala had played a leading part in the formation and development of the educational policy of HMDP Sabha. 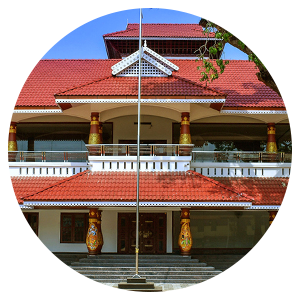